Love, Hope & Pizza: How You Can Have a Career that Gives Back 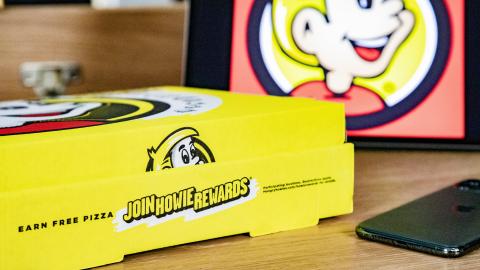 Do you have a desire to help others? Many people can work in a job they like; even fewer have one they love…but how many can say that their career path brings joy AND consistently allows them to give back? As a Hungry Howie's franchise owner, you'll be rewarded in the best of both worlds. Daily.

Because owning a Hungry Howie's franchise feeds your soul in work and in life -- but it also incorporates opportunities to give back.

Surely you've seen our Love, Hope & Pizza campaign in October -- but did you know Hungry Howie's is proud to be a sponsor of the National Breast Cancer Foundation (NBCF)? We've raised more than $3 million to provide help and inspire hope to those affected by breast cancer -- including through early detection, education, and support services.

So for a dozen years (and counting!), Hungry Howie's has supported the NBCF by changing our recognizable yellow pizza boxes to pink every October during National Breast Cancer Awareness Month to help raise awareness.

But beyond that, we put our money where our mouth is: Not only do we donate funds from pizzas we sell throughout the country during October to the NBCF, but we also raise money for the charitable organization through in-store and online donations and selling some Love, Hope & Pizza gear.

As a Hungry Howie's franchise owner, you'll also be invited to our "Pink Night" during our annual convention, where we all wear pink to show support. And you'll be taking part in the fight against breast cancer, every single day.

Giving Back to the Community

We want to be more than "just" a pizza franchise. We want to connect, and make a positive impact on the community in whatever ways we can.

As a Hungry Howie's franchise owner, you'll have the opportunity -- like our other franchisees -- to choose a local charity or school in your community to start donating to. It's customary during our grand openings to donate a percentage of sales to that organization, and the charitable spirit extends beyond that. Not only have you made a connection in the community, but you're able to give back.

How many other careers can say that's blended into your daily routine? Hungry Howie's can!

Helping Those in Need

As a company, it's in our nature to do whatever we can to help others. That goes across the board for all our franchisees, too -- because you all love being able to provide kindness (and that's why we love our franchisees so much!).

During the pandemic, Hungry Howie's has done what we can to make sure first responders always had food ready while they were dealing with situations they've never encountered before.

And you may have also heard about our Random Acts of Pizza initiative -- where we try to help bring joy back to people who were isolated and separated from loved ones during unprecedented times.

Because sometimes it's the little things that mean the most.

If you have kids, or know someone who has kids, you've probably encountered fundraisers where the kids are selling something you may want, but you may not -- and feel obligated to buy anyway, because it's a fundraiser.

(And although the program is suspended during the pandemic, rest assured it will be back soon!)

Hungry Howie's: A Career that Gives Back

*Three store minimum. Previous management experience in multi-unit restaurant operations required. Weekly royalty fees will be waived for the first 52 consecutive Reporting Periods (as defined by the franchise agreement) for each Restaurant that you open, beginning on the date that the Restaurant is open for business to the public. Total waived for each Restaurant cannot exceed $50,000. Limit first three stores. Waivers are subject to full compliance with the terms of your franchise agreement and area developer multiple unit agreement (“ADMUA”), including opening the Restaurants in accordance with a pre-determined development schedule. Initial non-refundable Franchise Fees due at signing. Agreements and areas are non-transferable. Available for a limited time only. Other terms and conditions may apply in accordance with the franchise agreement and ADMUA. Limited to pre-selected areas in the following states: AL, AR, AZ, CO, DE, GA, IL, IN, KY, LA, MI, MS, NV, NC, OH, OK, PA, SC, TN, TX, UT, WV.

This information is not intended as an offer to sell, or the solicitation of an offer to buy, a franchise. It is for informational purposes only. Currently, the following states regulate the offer and sale of franchises: California, Hawaii, Illinois, Indiana, Maryland, Michigan, Minnesota, New York, North Dakota, Oregon, Rhode Island, South Dakota, Virginia, Washington, and Wisconsin. If you are a resident of one of these states, we will not offer you a franchise unless and until we have complied with applicable pre-sale registration and disclosure requirements in your jurisdiction.

All stores are independently owned and operated. Prices and participation may vary.  If you have online ordering issues, visit hungryhowies.com/help. If you need help ordering online due to a disability, please contact your Hungry Howie’s store for assistance. Pepsi, the Pepsi logo and related marks are trademarks of PepsiCo.

If you are having trouble using this website with a screen reader or other device or you need help ordering online due to a disability, you may also call (314) 732-4586 or your local Hungry Howie’s store for assistance.