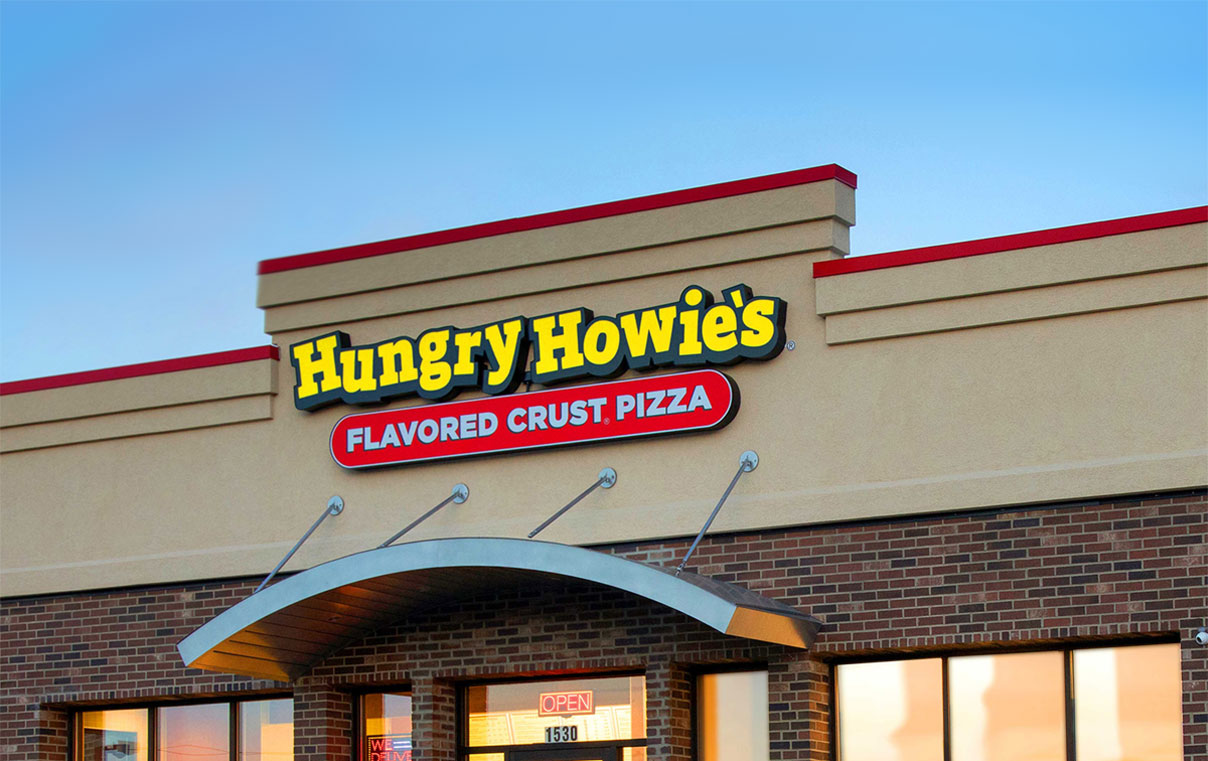 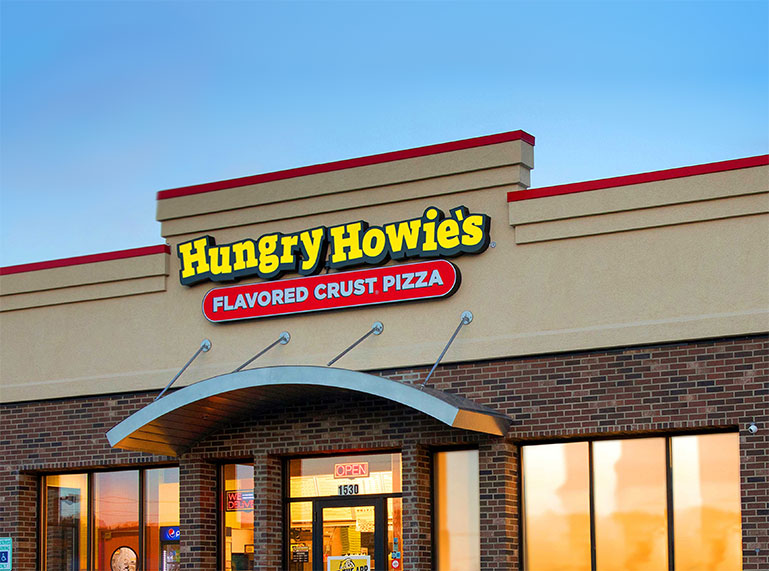 Up to$150,000in free royalties*
Get Started
Seeking Multi-Unit Investors
*This advertisement is not an offer of a franchise. Franchises are offered and sold only through a Franchise Disclosure Document. See below for further details.
Why invest in the best kept secret in pizza?
$1,210,573 auv** for the top 25%of franchised stores in 2020

HUNGRY TO START A REWARDING BUSINESS? JOIN ONE OF AMERICA’S LARGEST AND BEST PIZZA FRANCHISES

With almost 50 years of experience, Hungry Howie’s® is consistently ranked as one of the top pizza franchises in the nation. ​

We started in 1973 with one hamburger shop turned delivery and carryout pizzeria in the suburbs of Detroit. Our President/CEO Steve Jackson started there as a delivery driver. Since then, Hungry Howie’s has become a top pizza franchise with over 530 locations in 20 states and growing.

We owe our success to:

At Hungry Howie’s, we provide people the opportunity to enrich their lives and their community. Our franchisees are an integral part of the communities they serve. Whether it is supporting a nationally recognized charity or the elementary school down the street, our franchisees give back. ​

Since 2009, Hungry Howie’s has supported the National Breast Cancer Foundation® through our Love, Hope & Pizza campaign. Together we’ve raised over $3.5 million for this deserving cause.​ 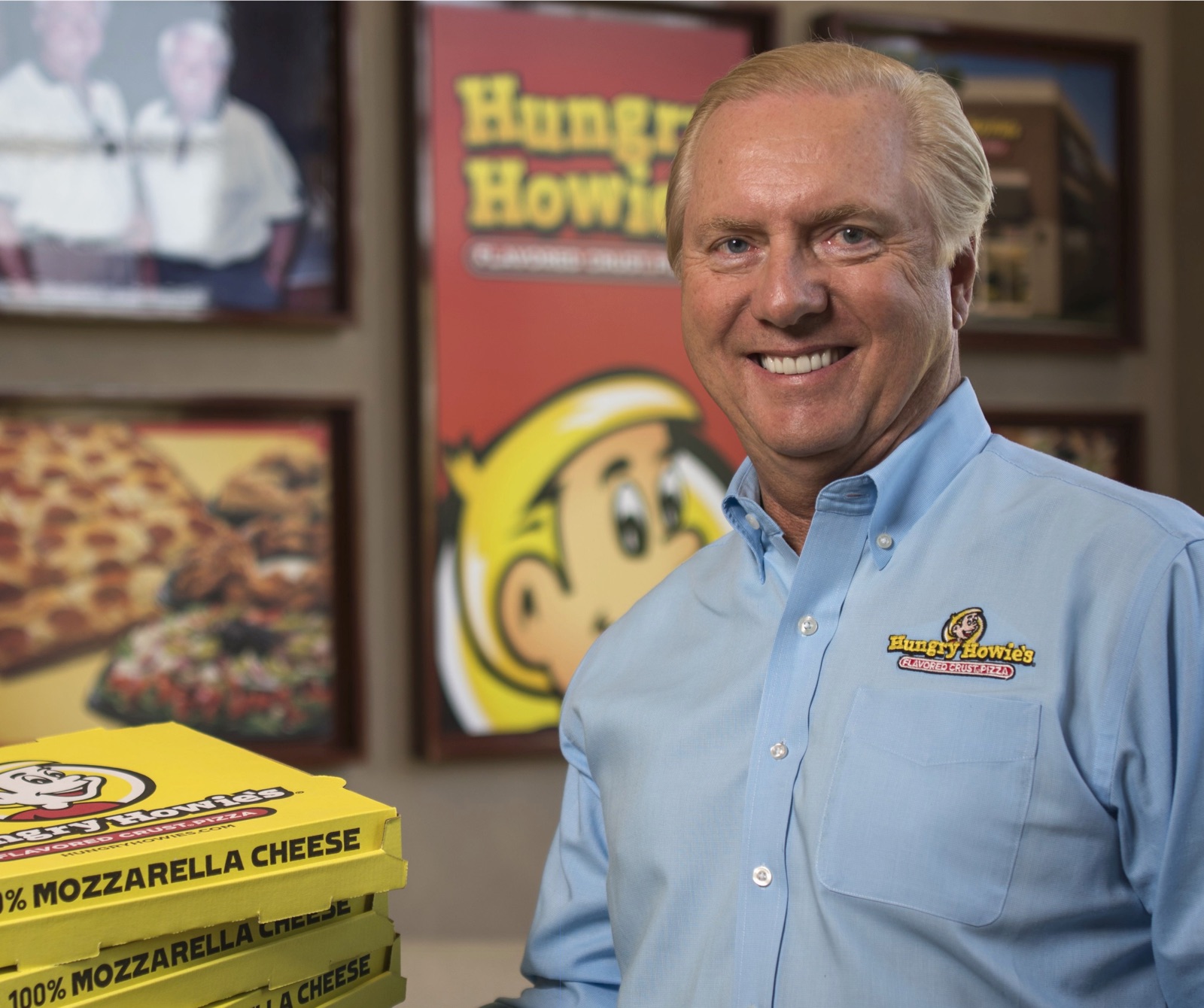 Meet CEO Steven Jackson: The Pizza Entrepreneur Dishes on the Brand’s History and the Secret to Our Success

Find Out What Others Are Saying 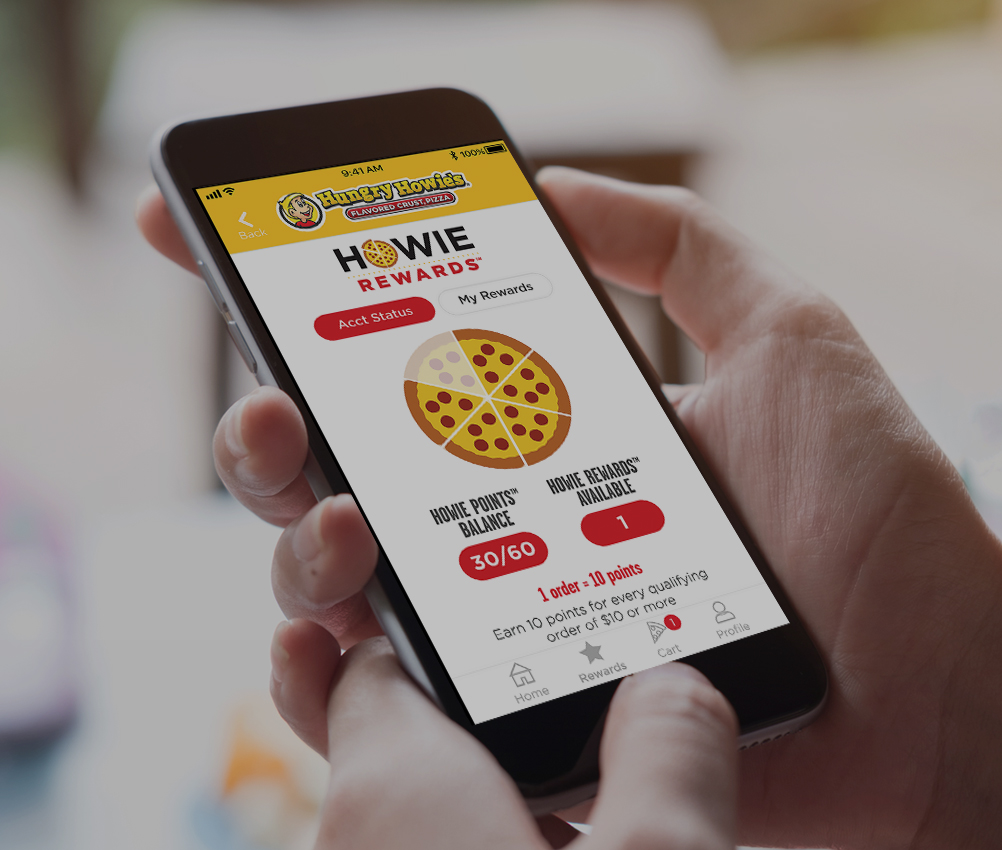 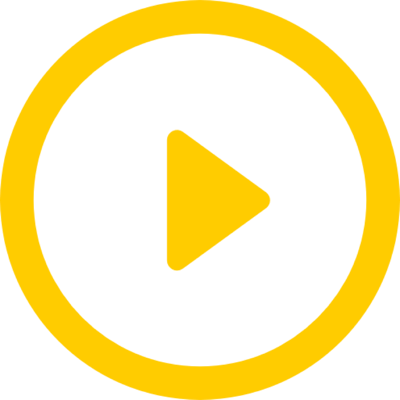 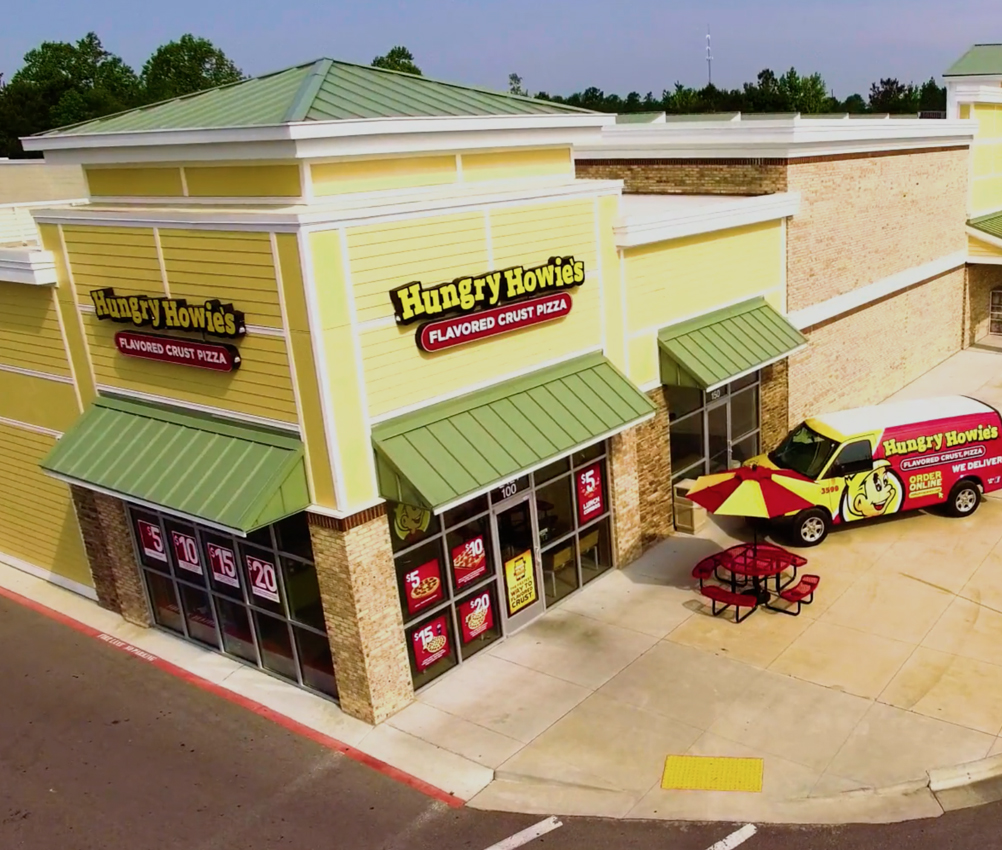 CTA:
Get Started
Leadership to Keep Hungry Howie’s On Top

Quick service restaurants (QSR) is a competitive category.  One of the key advantages to owning a Hungry Howie’s franchise is the access you will have to a proven system developed and maintained by long time industry experts.  Our leadership team and field staff have significant experience in QSR and especially the pizza business.  They are passionate about nurturing, supporting, and developing franchisees, whether they are a one-unit operator just getting started or a seasoned multi-unit restaurant operator.  You will have the opportunity to sit down, talk and have lunch with our leadership team when you visit us. 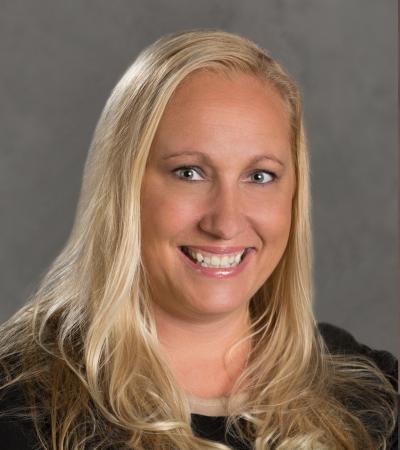 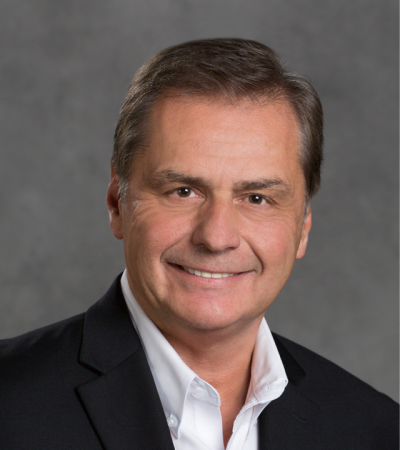 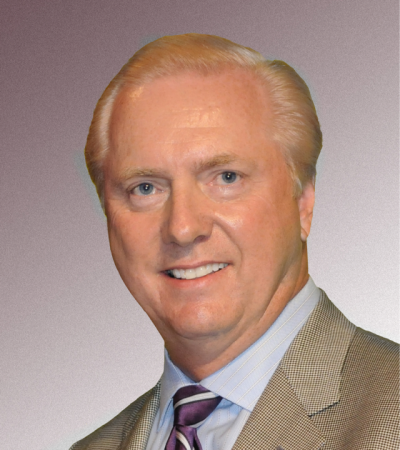 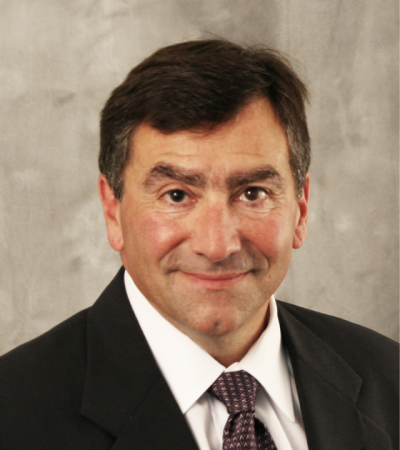 President & CEO
In 1973, Steve began working at a carry-out and delivery pizzeria as a delivery driver. This pizzeria would become Hungry Howie's Pizza. Steve's hardwork and determination led him to become President of Hungry Howie's Pizza in 1981. He has been an officer and director of Hungry Howie's Distributing since its incorporation in 1986. Additionally, Steve owns and operates 11 very successful pizza franchise locations in the metro Detroit area.

Vice President & General Counsel
Moe wrote his first franchise agreement in 1985 and has been involved in franchising ever since. From 1986 until 1990, Moe was Corporate Counsel to Vartan Enterprises, Inc., a prominent Pennsylvania-based real estate development company. Moe returned to Michigan in 1990 and established a private law practice, concentrating in franchising, licensing, and real estate law. In 1994, Moe was named Vice President of Business Development and General Counsel for Papa Romano’s Enterprises, Inc., a Michigan-based pizza franchise. In 2007, Moe joined Wireless Giant, a regional retail cellular phone store chain, as Vice President of Franchising and General Counsel. For 5 years, he held the position of Chief Operating Officer and General Counsel. Moe joined the Hungry Howie’s family in 2012 as Vice President and General Counsel. He is licensed to practice law in Michigan and Pennsylvania and a member of the Antitrust, Franchising and Trade Regulation Section of the State Bar of Michigan. Moe is on the Advisory Board of Northwood University’s Franchise Management degree program. He is a licensed real estate broker.

Director of IT
Dan began working with Hungry Howie's in 1997 as the primary consultant for Hungry Howie’s first consumer website. In 1999, he offically became part of the Hungry Howie's team in the role of Network Administrator. In 2006, he expanded use of technology in the brand and the growth of the department in the role of IT Manager. Dan was named Director of IT in 2011, using his 30 years of experience in technology and over 20 plus years in the pizza industry to build solutions for the brand.

Director of Finanace
Scott began his career in public accounting, working as an auditor with the firm Plante Moran. Scott worked his way up from the staff auditor level up to the audit associate level where he managed entire audit engagements, worked on a variety of technical research projects, contributed to the Firm’s professional standards review processes, and was responsible for various training engagements. Scott joined the Hungry Howie’s team in 2018 as the Senior Accounting Manager. He was named Director of Finance in 2020. He is also a CPA in Michigan.
Get Started
Back to Top

*Three store minimum. Previous management experience in multi-unit restaurant operations required. Weekly royalty fees will be waived for the first 52 consecutive Reporting Periods (as defined by the franchise agreement) for each Restaurant that you open, beginning on the date that the Restaurant is open for business to the public. Total waived for each Restaurant cannot exceed $50,000. Limit first three stores. Waivers are subject to full compliance with the terms of your franchise agreement and area developer multiple unit agreement (“ADMUA”), including opening the Restaurants in accordance with a pre-determined development schedule. Initial non-refundable Franchise Fees due at signing. Agreements and areas are non-transferable. Available for a limited time only. Other terms and conditions may apply in accordance with the franchise agreement and ADMUA. Limited to pre-selected areas in the following states: AL, AR, AZ, CO, DE, GA, IL, IN, KY, LA, MI, MS, NV, NC, OH, OK, PA, SC, TN, TX, UT, WV.

This information is not intended as an offer to sell, or the solicitation of an offer to buy, a franchise. It is for informational purposes only. Currently, the following states regulate the offer and sale of franchises: California, Hawaii, Illinois, Indiana, Maryland, Michigan, Minnesota, New York, North Dakota, Oregon, Rhode Island, South Dakota, Virginia, Washington, and Wisconsin. If you are a resident of one of these states, we will not offer you a franchise unless and until we have complied with applicable pre-sale registration and disclosure requirements in your jurisdiction.

All stores are independently owned and operated. Prices and participation may vary.  If you have online ordering issues, visit hungryhowies.com/help. If you need help ordering online due to a disability, please contact your Hungry Howie’s store for assistance. Pepsi, the Pepsi logo and related marks are trademarks of PepsiCo.

If you are having trouble using this website with a screen reader or other device or you need help ordering online due to a disability, you may also call (314) 732-4586 or your local Hungry Howie’s store for assistance.